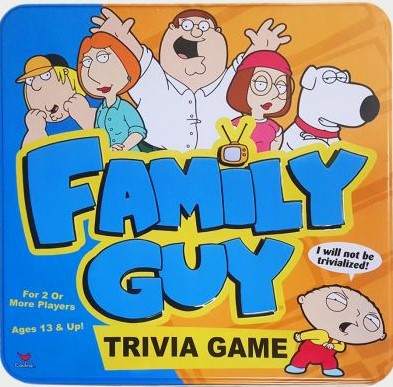 Peter, the big, lovable loaf who always says what's on his mind. Lois the adoring mother who can't figure out why her baby son keeps trying to kill her. Their daughter Meg the teen drama queen who's constantly embarrassed by her family. Chris, the beefy 13-year-old who wouldn't hurt a fly, unless it landed on his hot dog. Stewie, the maniacal one-year-old bent on world domination. And Brian, the sarcastic dog with a wit as dry as the martinis he drinks.

Now at long last, a Trivia Game based on television's most dysfunctional cartoon family!

1000 Trivia Questions will keep you guessing-- and laughing!